Home My Thoughts Exactly Left Behind is Right Behind

Left Behind is Right Behind

Jim Munroe is a leading light in the do-it-yourself/self publishing universe. After getting bummed out by some less-than-thrilling experiences with the Big House who published his first, science-fictiony novel Flyboy Action Figure Comes With Gasmask, he set out to create a methodology and infrastructure for people (like me) who had decided to go the non-corporate, auteur/artist route. As a founder of AdBusters, Jim had strong culture-jamming experience and street cred upon which to build.

One result of his going out on his own was the No Media Kings website, another was a kind of permanent tour of musicians, artists and writers, both of which are vehicles for similar-minded do-it-yourself artists. He’s written & published several SF novels, and he also makes low-budget indy films and videogames. I’ve met Jim once or twice, and he’s given me some publicity and advice.

Jim’s most recent book is a graphic novel about a post-Rapture world. Below the fold, a short review, part of my occasional series of reviews of self-published books.

Our story opens on claustrophobia-inducing subway car, where we meet a person wrapped up like mummy and a person wearing raven’s head mask. Somebody is railing about Jesus.

Right off the bat we have kind of a of post-apocalyptic feeling, which only intensifies as we turn the first few pages. Rapture has happened, and among those left behind, everything is somehow wrong. Telephone, water, electricity– all are in scant, irregular supply. (Mummy-boy and raven-girl, who are kind of aimless drifters, get prime squatter’s digs, taking over an apartment no longer needed by some Christians who have gone up into the sky). But why is everything wrong? Although the Rapture has happened, it turns out that not that many people are actually gone. 144,000 believing Christians is not very many from a world of six billion people. Even if all the Raptured Christians had lived in North America, that’s still fewer than one person in a thousand who has gone. So why is everything falling all to hell?

A couple of reasons, actually.

There’s Bush in the White House asserting marshall-law powers, backed by some guy who looks like Jesus. Clearly, government is fucked up. On top of that, there’s all kinds of magic and spook going down, and things just don’t work the way they used to. To borrow a phrase from Howard the Duck, it’s as if a cosmic axis has shifted, and the laws of the physical universe have changed in some kind of hard-to-quantify way. And finally, there are the damn angels, who are kind of like parachute infantry that don’t need parachutes because they have wings. They are remorseless professional soldiers who have occupied the cities and who kill, with guns, swords and other efficient weapons, anybody who steps out of God’s line–where “stepping out of line” is defined in a pretty arbitrary way. For example, if you go to the aid of somebody hit by a car, you’re likely to be summarily found guilty of “laying on of hands”, which is tantamount to sorcery when not performed by a Christian, and for which the punishment is death.

So it’s kind of like Baghdad, only with magic: dogs talk, people discover powers — levitation, clairvoyance, invisibility, ability to conjure animals out of ashes–and a kind of anomie lies thick over everything.

In this depressing chaos, an order begins to emerge. Like-minded people find each other, help each other, discover unsuspected abilities. And eventually they reach a kind of equilibrium in the new environment, which is in some ways, despite appearances, a better environment than the pre-Rapture one. And they decide that they have to get rid of the angels.

So, that’s the plot.

In Munroe’s storytelling, some of this is apparent, some of it only becomes clear when you go back and read it a second time after reading ahead a few pages, and some of it remains frankly murky.

The artwork is good; some panels are great. 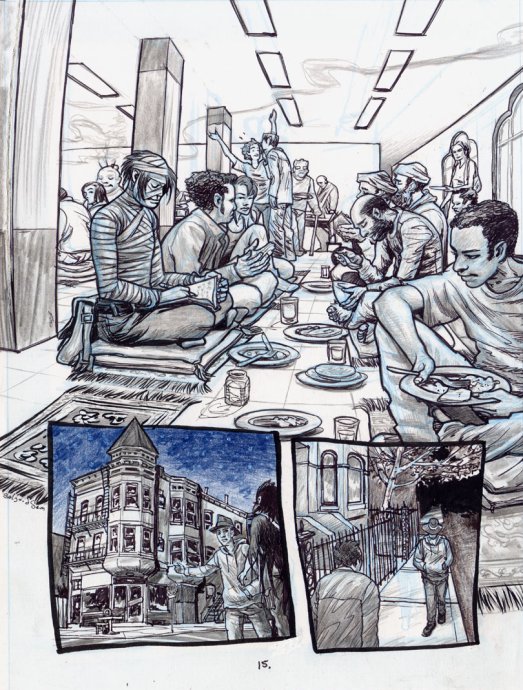 The treatment of angels as paratroopers is wonderful.

Reading graphic novels is a learned skill, and I haven’t really learned it yet. I used to be quite a comic reader back in the day, but don’t do it much any more and I haven’t kept up with conventions for showing time lapses, emotional states, different interpretations of the same incident, etc. In other words, sometimes I didn’t have a clue what a particular panel was trying to tell me. In Therefore Repent, some backstories are mere hints. There’s a “Lilith” character who has some kind of special significance. Me, I just wonder what she’s doing there–although the means of communicating with her is great.

Some of the panels are much better drawn than the others; clearly Salgood Sam is a talented artist, but I got the feeling that some of the panels were rushed. But hey, don’t take my word for it. The guys have generously put a whole lot of the book online, and you can check it out for yourself. Take a look & see if you like it!

In summary, I liked the book for its great “whole fucking planet turned to shit” look and feel & its very satisfying contrarian response to the ugly premise of the “Left Behind” series.

The surprise ending is consistent with what’s in the bible. Go buy a copy; it will help offset the karmic imbalance caused by all the copies of the LaHaye crap out there.